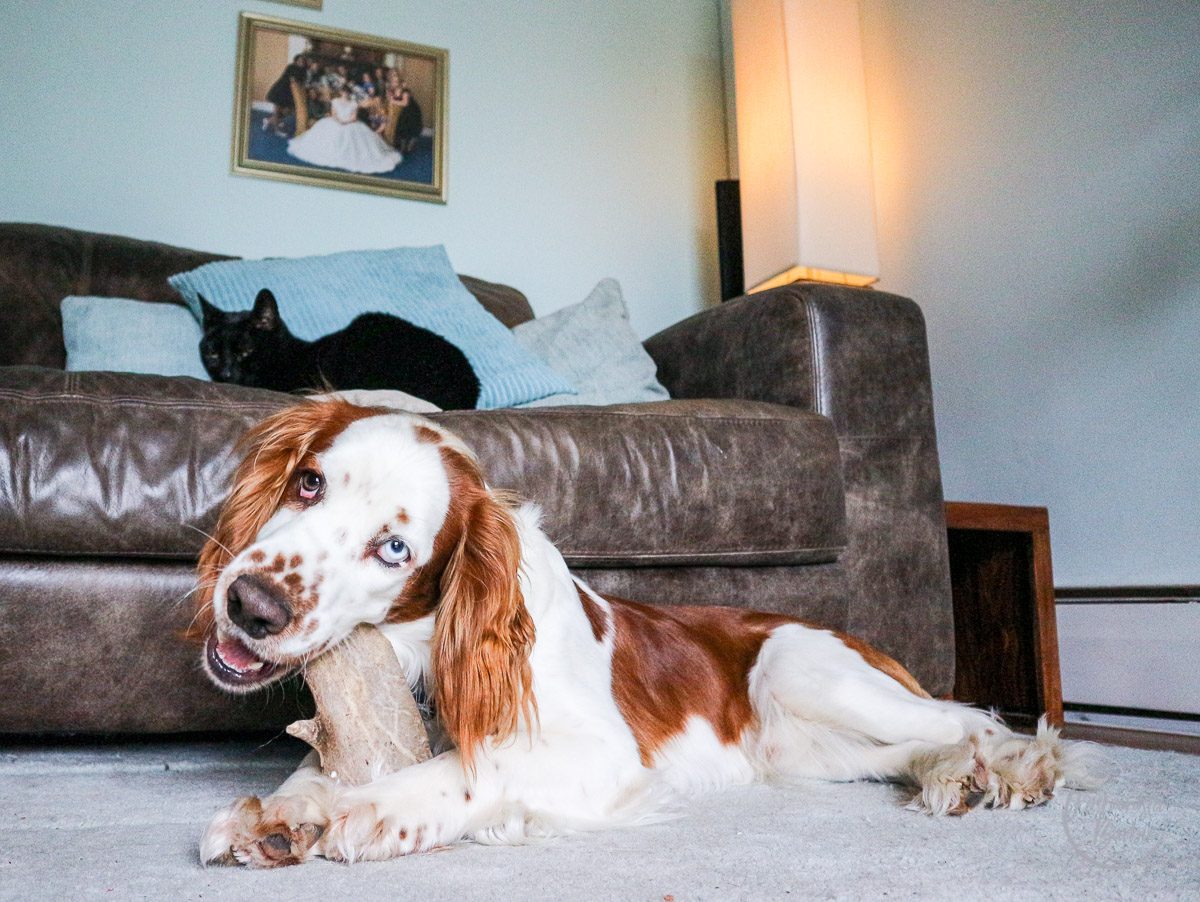 Our little Falcon puppy turned one recently, wow time has flown, and I thought it was a good milestone to share my puppy experience so far, with a few tips and tricks I’ve learnt along the way, as well as how big a challenge having a little one is, I can tell you it has been harder than I thought to be a puppy parent.

OK, disclaimer, I’m not a puppy or dog expert, these are just a few things I’ve experience or picked up while looking after Falcon, our Welsh springer spaniel puppy. One of the major things I’ve learnt is that everyone has an opinion on how to raise a dog, and you need to learn quickly that every owner has their own ways of doing things, and each dog learns differently and has different needs, and you know, that’s OK. This took me a long time to understand, but when you do, it gets easier.

Be prepared for a shadow

I heard from a lot of people that it was like having a baby, I didn’t quite believe but trust me, they need lots of care and attention, they basically just want to be loved, fussed and be with you at all times, I even sadly can’t go to the toilet alone. Falcon wants to come everywhere with me, to say I’ve tripped up a few times is an understatement.

The first few months are the trickiest, think sleepless nights with crying, lots of naughty accidents, the crazy pulling on the lead, and the constant stealing of anything not nailed down, as well as the adjustment to a new routine, the early mornings, the walks, and especially when he was little the 4 feeds a day.

Commitment is important, you need to have the time to raise a dog, especially those early months. Saying that, you can’t be with them at all time, which is why we embraced a little technology help in the form of an indoor nanny-style camera, which connected to our smartphones, so that when we weren’t in, we could see Falcon and be reassured that for the most part he just slept when we were out. However, on those rare times he was being destructive and generally howling I knew that I had to come home as soon as I could.

We’ve been using the Petplan Panasonic Smart Home Monitoring Kit, which comes with an indoor camera that connects to your smartphone or tablet, and it even comes with a Micro SD card so you can record your puppy getting up to know good. I used the camera a lot to see what Falcon got up to and to see if the treats and toys I’d left him entertained him for long enough, I soon learnt that a frozen Kong toy was my best friend while out.

The kit also comes with a handy Smart Plug, which I plugged the radio into, so if I forgot to keep the TV on for him I could turn on via the app from wherever I was, super smart and really made a different to keeping Falcon content, he doesn’t really like being alone so having voices and music on really helps.

In the summer though you could use the Smart Plug to activate a fan, which could turn on when the camera’s temperature sensor hits a certain temperature to help keep your pet cool.

There is also a door sensor as part of the kit, which I haven’t used, but a friend said that they have one and it lets them monitor when their dog walker comes in to collect their dog. But thinking about it I could use it on my office door to monitor when Falcon comes in to steal my pens off my desk.

I also chatted with my vet about the use of a camera and she said they find it handy to look at footage of dogs especially when it comes to explaining behavioural symptoms, and it can make it easier for them to diagnose and suggest help.

This means find a vet, very important, get your little one microchipped, get pet insurance, dogs can be pretty expensive, and get your puppies vaccinated, this is so important not just for the health or your dog but others that it may come into contact with.

When getting insurance, check with your vet on which ones they advise and which ones they cover the vet fees through them directly, for us, that was with Petplan Pet Insurance. They have a number of different policy types so find out what you can afford and what you need to be covered for.

The ‘to crate or not to crate’ debate. We did get a crate, it was so ugly and huge it took over the living room, and Falcon hated it. We tried for weeks, he howled all night long, and we didn’t get any sleep. As soon as we brought the crate upstairs he became so much better. As soon as he slept through the night we decided to get rid of the crate and now he sleeps in our bedroom with no major issues, except he’s obsessed with scratching the carpet and he’s a very loud snorer.

Puppies don’t train themselves, oh how I wish that was the case. Patience is definitely needed when owning a puppy and enrolling in some puppy classes as soon as they are able to after their vaccinations is a great idea. Not only will you learn key obedience skills but you will be socialising your puppy with new dogs, people and environments. I can’t remember how many places we went to in those early months, finding a fire station so he could get used to sirens, somewhere close to a bus, a crowded place, a bar, a farm, basically places you will want to go with him in the future so get can get used to new sounds and smells.

I can’t stress how important it is to make sure your dog mixes nicely with other dogs, trust me it will make walks so much more enjoyable. Falcon might be giddy to see everyone and every dog but at least he doesn’t bark or growl at them and he isn’t scared of them.

Do your training in short bursts, like 15 or 20 minutes, depending on your dog’s attention span to get the best result. Plus, always end a session, whether it has been successful or not, with a lot of praise, a treat and maybe even five minutes play time, so he’ll be eager to get involved next time.

Get used to handling your puppy

Introduce your puppy early on to grooming, the brushes, the scissors and the clippers. Especially with spaniels it’s essential that your dog gets used to having their ears checked, they get a lot of mess on them, and some dogs can be sensitive to you touching them, so make it fun and I find treats help, a lot. We thought we’d done enough early on, but for some reason, Falcon has decided he is now scared of having his nails clipped so it makes for a stressful situation. So I would just suggest that you do things regularly so your puppy can get used to it.

Establish a routine and rules

First off, reward good behaviour and ignore bad behaviour, this is hard, especially early on when everything they do is still done with that cute face, but establishing a routine and rules early on will help. We have set commands such as sit, down, off, stay, leave, as well as a whistle for recall, and for the most part he understands, however, we are in those annoying teenage years where he doesn’t come back when let off the lead, I’m told it will pass but it does show you have to keep on top of your training.

We’ve also established set times for food, we make him sit before he gets any, and we also try and set out time to do play training. He loves retrieving balls and frisbees and 15-20 mins a day really helps tire him out a little as well as get some bonding, training time in. We also make sure he has enough chew toys and bones, this is so important to keeping the furniture in one piece. I can’t recommend antler chews enough, they are long-lasting and they are much less likely to chip or splinter than processed bones.

Lastly, enjoy it, sometimes it’s hard, I’ve cried more times than I would like to admit over the last year, but stay positive, having a puppy is rewarding, I can’t get over how loving Falcon can be. For all the hard times there are a lot of positives, the main one being appreciating the outdoors more, seeing him run along a beach for the first time was one of the cutest things ever.

Do share any puppy tips below, I’m still learning and would love to know what you did that worked.

You may also enjoy: